What is Fly Fishing?

Fly fishing is a form of angling that uses an imitation of a fish’s natural food source, the fly, to fool the fish into eating it. While the exact history of fly fishing is unclear, it can be traced back to the 2nd century. Back then, it was simply a source of food for survival but has been shaped over the years by many men and women into the sport, and passion, that it is today. 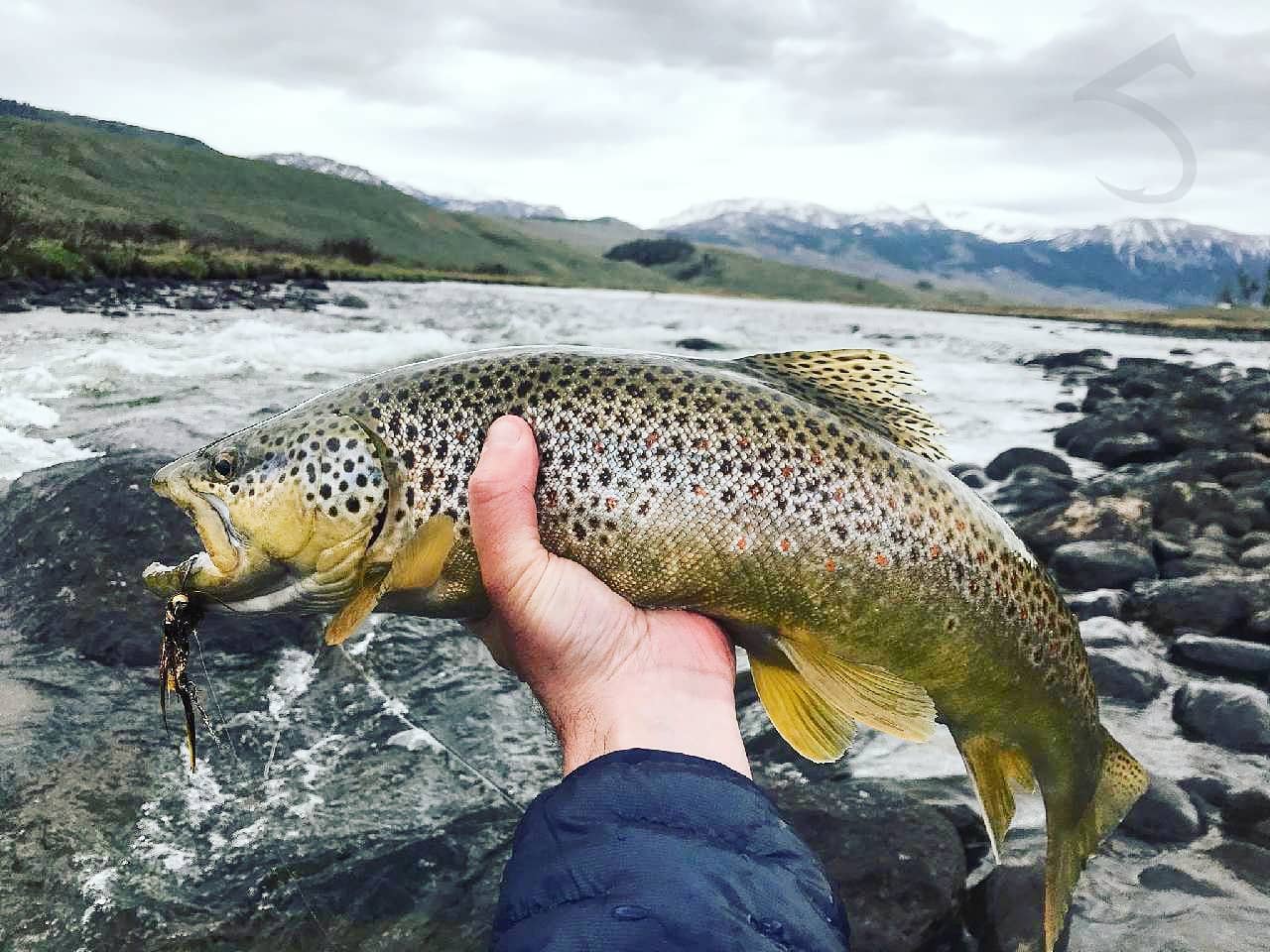 Many anglers these days pursue fly fishing as a form of relaxation amongst the river and the outdoors, but there are also those that seek the competitive side, and even the plain old exploration and adventure of an unknown world.

One true fact is that many fish live in beautiful places, and for some, it is that which drives them to pursue fish with a fly. The adventure in exploring a new river or lake, possibly in a backcountry scenario that is seemingly void of other human life can be a fly fisher’s happy place.

For others, it may be the thrill of competition. Competitive fly fishing has been around for many years, but has taken on a large following in last decade.

Because fly fishing is a sport in which almost anybody can learn, it is only a matter of each angler finding their own favorite reasons to fish.

What Fly Gear is needed to Fly Fish?

Like most sports, fly fishing requires specialized equipment in order to perform correctly. While the amount of equipment available to go fly fishing is vast, there are certainly some basics that are essential to the sport.

What is a Fly Rod?

A fly fishing rod is the primary tool for the fly fisher. It allows them to cast the fly, set the hook on a fish, and fight the fish. Most fly rods these days are constructed out of graphite, fiberglass, and bamboo, and come in various lengths, strengths, and actions.

The length of the fly rod will typically range from 7.5 to 13.5 feet with certain applications appealing more to certain lengths. In general, a shorter rod can be a better option in smaller creeks, and vice versa. Probably the most common and versatile length is 9 feet. Of course, transporting a rod of those lengths is difficult in one piece, so most of them will break down into 2-4 sections.

The strength of a fly rod is more commonly known as the weight of the rod and can be labeled as 0-14 with 14 being the strongest. In trout fishing, it can be said that the 5 weight is the most versatile, while an 8 weight can be best for the transition into saltwater fly fishing.

A few examples of length and weight choices might be:

Along with the length and weight, fly fishing rods are offered in different actions that are going to affect how the rod performs. Those actions are typically referred to as fast, medium, and slow, but some are also labeled as medium-fast. A fast action rod will bend mostly in the tip section, while a slow action rod will bend throughout the rod. Generally, a fast action rod may be considered a better tool for casting distances, casting in the wind, or casting larger flies while a slow action rod is seen as a better delicate dry fly rod for shorter distances and more bend with smaller fish. It is equally as important to consider the anglers casting stroke and which action is better for them.

For tips on choosing the correct fly rod for you, click here.

Parts of a Fly Rod

Blank – The blank of the fly fishing rod is the actual rod, usually constructed from graphite, fiberglass, or bamboo.

Ferrule – This is the connection at which the fly rod sections are put together. Ferrules refer to both male and female ends of which the butt section is inserted into the tip section.

Handle – Traditionally, the handle of a fly rod is made out of cork, but other options have been brought to the market in recent years.

Reel Seat – The reel seat is usually made from wood, graphite, or aluminum and includes a hood and lock rings. This is where the fly fishing reel is mounted to the fly rod.

Fighting Butt – This is an extension of the fly rod that gives the angler a little extra leverage while fighting a fish. It can also help to balance a rod and reel outfit. A fighting butt is generally used on heavier weight fly rods, but some European Nymphing rods have them in lightweight sizes as well.

Hook Keeper - The hook keeper is a small wire loop just in front of the handle. It is meant to hook the fly on while not in use. This is not to be confused with a guide and is not meant to run the line through.

Stripping Guide – The stripping guide is the first, and sometimes more, guide on the blank of the rod above the handle. It is usually Titanium with a porcelain liner to limit friction as the fly line passes through it. Tip: do not hook flies to the stripping guide as they can scratch the porcelain, which can damage the fly line.

Guide – The guides run the length of the fly rod blank and hold the fly line in place.

Tip Top – The tip top is the final guide at the tip of the fly rod.

What is a Fly Fishing Reel?

The reel is the spooling device attached to the butt end of the fly rod and its purpose is to contain and control the fly line. The reel consists of two main pieces, the frame, and spool, which can be separated from each other. Attached to the frame are the reel seat, drag knob, and the hub/drag system. The spool contains the crank, counterweight, spool release mechanism, and is where the fly line and backing are spooled. Refer to the image below for a better understanding of each component. 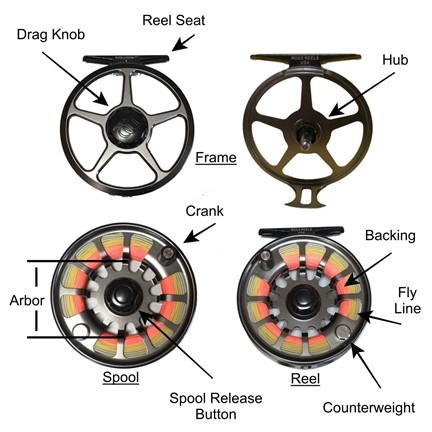 Frame – This is the outer part of the reel that the spool connects to. The frame houses the drag system, which includes the drag knob and the hub.

Drag system – The “drag” refers to the allowance of line to be pulled from the reel and is adjusted by turning the drag knob. Turning the drag knob either direction will open and close the drag. If open, the line can be pulled from the reel easily. If closed, there will be increased tension and it is harder to pull line from the reel. This is used for controlling the line, and the fish once hooked. Some amount of drag should always be engaged while fishing to avoid the reel free spooling and tangling the line.

Drag knob – The knob on the back of the frame that allows the angler to open and close the drag system.

Hub – The hub is the “spindle” in the center of the frame that the spool will slide on to.

Spool – This part, once connected to the frame, spins in both directions at which can be adjusted by the drag system. This part of the reel houses the fly line and backing. It is possible to buy additional spools that fit the same frame to allow the angler to have multiple fly lines ready to fish with the same frame.

Spool release mechanism – This can be a button, a screw, or even a pressure release that will allow the spool to be released from the frame once activated.

Crank – A knob for the angler to hold on to in order to turn the spool and retrieve the fly line and backing.

Counterweight – A balancing feature to counter the weight of the crank on one side of the spool. Without this, the reel would wobble while spinning at high speeds such as when a fish is running with the line.

Arbor – This refers to the internal width of the spool at which the backing and fly line will wrap around. A larger arbor will retrieve line faster with fewer turns than a smaller arbor. A larger arbor can also help reduce memory and coil of the fly line.

Types of Drag Systems in Reels

Click and Pawl – This is essentially a “drag less” reel as it only allows minimal, if any, adjustment to drag tension. This type of drag is great for small, lightweight rod and reel outfits for chasing smaller fish as there is enough tension to prohibit a free spooling of the line, but there is not enough tension to control a large fish. Click and pawl drags usually consist of a spring-tensioned pin pressed against a disc with teeth. As the disc spins, the pin “clicks” between the teeth creating enough tension to not free spool.

Disc Drag – Most modern drag systems are made up of some form of a disc drag where stacked discs are compressed as the drag is closed. These discs will turn easily with an open drag, but as the drag is closed down, the discs compress against each other creating friction and not turning as easily. Most disc drag systems are sealed in a housing to protect them from sediment and require zero maintenance.

Cork drag – This type of drag uses a cork disc to create friction against the spool. As the drag is closed down, the cork is pressed harder against the spool, creating the friction needed to stop the spool from turning. These need more cleaning and lubrication than the first two drag systems mentioned.

How to Set-up Fly Reel

Most fly fishing reels can be set up for right or left handed anglers with a simple position change of the drag system. For a right-handed angler, the reel should be set up with a left hand retrieve. This will mean the angler is casting with their right hand, and then reeling with their left. This will be the opposite for a left-handed angler. Once the correct retrieve direction is set, it is time to add the backing and fly line.