When visiting a new fishery for the first time, it is always best to ask a local for some fishing advice, at least some basics. Upon moving to a new place, I met many “locals” and all of them seemed to have one bit of basic advice for many of the nearby waters; the fish play during banker’s hours.

As someone whom was born and raised in Colorado and spent 20 years fly fishing there, naturally, I was perplexed. In Colorado, you get out there early to catch the “morning feed” paired with a stunning sunrise. It was also a good idea to stay out late for the evening hatch and a famed orange sunset. Over the past decade, this grew in importance to beat the crowds that now surround the rivers and lakes of Colorado. Also, it was just a good idea to extend one’s fishing hours to the fullest extent possible, especially if they were spent without cell reception.

Furthermore, nearly all fishing trips I have been on have started early and often included a dark drive or boat ride out in the morning as if to catch that half asleep tarpon feeding with his guard at ease or that late evening largemouth bass willing to eat a popper with reckless abandon. This is not the case in this new place. These fish are lazy. They sleep in late. They tuck in early. They live by bankers’ hours.

I arrived in spring when it was colder than I cared to fish in early or late hours anyway, especially since I no longer live in “tailwater” country. These are mostly freestone rivers that freeze over, then run big until the winter’s bounty finally melts away. On top of that, the daylight hours are still in short supply in spring and I also work bankers hours that time of year. Every chance I could, I would roam the rivers edges doing what I have always done during runoff, which is dunking brightly colored worms in every slow pocket. Though this tactic worked as well as it always has, I found myself out there alone. Where did all the fly fisher people go? 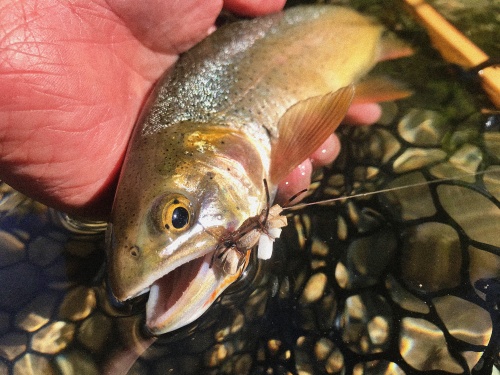 As time ticked by, warm weather settled in, runoff settled down, and daylight hours slowly pushed darkness into the outskirts of the night. More and more people showed up on the rivers, but I still found myself alone out there early in the morning. Just the way I like it, but still a little confused at my new fishing situation.

Early mornings would require nymphing until fish started rising, then a switch to dry flies for the remainder of the day. This happened at about 9 or 10 am every day. As the evening approached, the fish became less willing to rise and the nymphs would come back out for another round. Seeing other people out there correlated with those dry fly hours…

After spending a summer here, I have come to realize what I consider the true meaning of the “bankers hours” style fishing. Its not that the fish hide under a rock and don’t eat outside of the 9-5, they absolutely do eat, but not actively on dry flies. This is dry fly country and here in dry fly country, the fish are targeted during banker’s hours. Sit back, relax, and enjoy your coffee, the fish will wait.